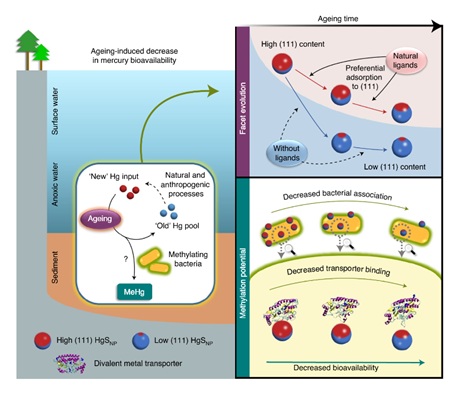 Fig. 1 Conceptual illustration of ageing-induced decrease in bioavailability and methylation potential of nano-metacinnabar due to facet evolution.

Mercury is a ubiquitous heavy metal that poses a significant threat to public health. Environmental contamination by mercury in its organometallic form, methylmercury, remains a major global concern due to its neurotoxicity, environmental persistence and biomagnification through the food chain. Decades of research have gone into understanding the mechanisms regulating microbial mercury methylation, the predominant source of methylmercury accumulated in the food web. The scientific community just recently started to realize that mercury methylation cannot be accurately predicted based on aqueous mercury speciation alone, and that solid phase ought to be considered in the predictive models for MeHg production. However, there remains limited mechanistic understanding of microbial methylation of particulate-phase mercury.

Herein, the study of Professor Zhang and her team demonstrates that nanoparticulate metacinnabar that forms during the early stage of mercury mineralization represents the bioavailable solid phase for mercury methylation, and the exposed facet is a crucial determinant of the methylation potential of nanoparticulate mercury.

The researchers assess the time-dependent changes in structural properties and methylation potential of nanoparticulate mercury using microscopic and spectroscopic analyses, microcosm bioassays and theoretical calculations. They show that the methylation potential of a mercury sulfide mineral ubiquitous in contaminated soils and sediments (nanoparticulate metacinnabar) is determined by its crystal structure. Methylmercury production increases when more of nano-metacinnabar’s exposed surfaces occur as the (111) facet, due to its large binding affinity to methylating bacteria, likely via the protein transporter responsible for mercury cellular uptake prior to methylation. During nanocrystal growth, the (111) facet diminishes, lessening methylation of nano-metacinnabar. However, natural ligands alleviate this process by preferentially adsorbing to the (111) facet, and consequently hinder natural attenuation of mercury methylation.

This discovery will significantly enhance the predictive capabilities of mercury methylation models (by incorporating particulate phases and interfacial processes). This finding will also inform management of ecosystems receiving natural and anthropogenic mercury inputs, by facilitating more accurate assessment of the response time prior to severe methylmercury accumulation.

The study was published in the journal Nature Geoscience. Nankai University is the first completion institution of the paper, Tian Li, a doctoral student of the school of environmental science and engineering, is the first author, and Professor Tong Zhang is the corresponding author of the paper. The research was supported by the National Key Research and Development Program of China, the National Natural Science Foundation of China, etc.