The overall missions of the partnership between Rice University (Houston, Texas, U.S.A.) and Nankai University (Tianjin, P.R. China) are to develop innovative and cost-effective solutions for timely and important energy and environmental problems and for sustainable urban development in China and United States, as well as to provide international educational opportunities to prepare students in both countries for an increasingly global workplace.

It has been argued that the economic development in  today is the most significant development in the history of humanity.  However, this rapid economic growth has come largely at the cost of significant deterioration of the environment.  In addition, with this accelerated development will come enormous demands on natural resources and ever increasing need for resource policy to insure a better life for future generation.  Many of the environmental challenges in  today have been faced by Americans in the past few decades, and continue to challenge our best scholars and private and public leaders.  These challenges include adequate supply of energy, safe water, clean air, and unpolluted soils and sediments.  There are also many other problems that are quite unique and can only be solved by innovative technologies and creative thinking.  These similarities and differences are great opportunities for scholars and companies in both  and  to develop the most effective solutions that require new science and engineering.

The challenges of the coastal regions of  are similar to problems that have been addressed in other coastal cities around the world, such as .  Earlier, many of the presently accepted Civil and Environmental technologies were developed by the British in an effort to remediate the Thymes river and the corresponding sources of pollution from the water sheds.  In addition to specific science and engineering, many ideas and legal concepts have been developed in , such as water-shed protection and pollution commodities.  These national efforts in  and  have often been the base to launch significant new understanding and approaches.  It is impossible to enumerate the specific breakthroughs expected from such a collaborative effort between Rice University and Nankai University in the Haihe River basin and Bohai Bay around coastal Tianjin, but given the nature of the challenge from run-off, historical manufacturing, and unchecked farming practices it is hard to imagine a more fertile area for new developments that will benefit people all around the world.

In addition to the anticipated new technologies, many of the challenges that are faced by development in China are ones that U.S. government agencies, universities and companies have already addressed and have considerable expertise that can be brought to bear in short time.  Many of these approaches will need to be adapted to the needs of the local areas.  These are opportunities for  companies to export technologies and expertise to  and vice versa and for Chinese companies and government officials to accelerate development, while minimizing the adverse environmental impact of industrialization.

Additionally, many corporations that have supported  for years, such as Shell, Exxon, Dupont, Halliburton/Brown and Root and Honeywell, are presently located in Tianjin Economic and Technological Development Area (TEDA)/Nankai or are attempting to build relations there.  Many of these companies need help in starting activities in this geographic area.  One of the central contributions that this Center can make to the U.S. companies and to the people of the Tianjin area is to act as an independent arbiter to represent honest and respected advice.  Such confidence will be built by many technical studies, conferences, and refereed publications.  In this role the Center will be a catalyst for economic development while protecting the environment and people of the region. 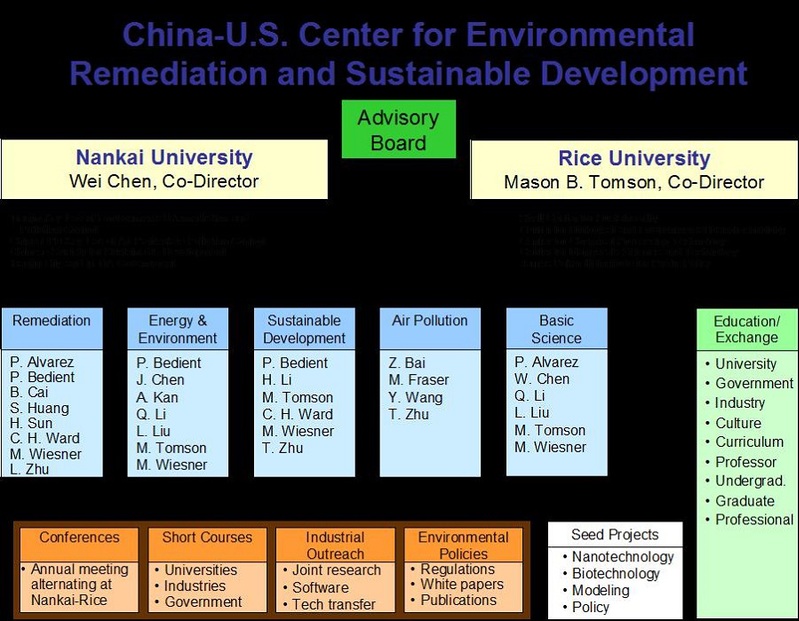 Joint projects will be identified in science, engineering, technology, and policy that consist of multi-disciplinary research in energy, natural resources, remediation, and sustainable urban development.  Emphasis will also be placed on education at many levels from undergraduate and graduate to professional.  Output will include conferences, seminars, short courses, scholarly papers, books, training materials, patents, and technologies.

A major source of technology exchange will be via visiting scholars and exchange students, as well as conferences, short courses and seminars.  In the initial stage of the Center, two to three faculty members from each institution will visit the other institution for up to one to two months each year.  Each year up to four students from each institution will participate in research in the other institution for one to three months; however, students will receive diplomas from their respective institution upon graduation.  A technical conference combined with the advisory board meeting will be held once each year, and will alternate between the two institutions, beginning at Nankai.  Periodic short courses and training seminars will be offered jointly by researchers from the two institutions.

The geographic focus areas of the project will be  (including TEDA) and the Bohai Costal Area, as well as  and the Greater Gulf Coast Area.  Tianjin is in many ways similar to Houston – It is the 3rd largest city of China and one of the major ports of the country;  the neighboring bay, Bohai Sea, is the site of the major northern Chinese oilfield with numerous activities in progress.  TEDA is the emerging financial, economic and technological center of northern .  According to ’s Prime Minister Wen, the sustainable development of TEDA is pivotal to the prosperity of eastern .  Similar comments can be made about .

The Center’s research will focuses on innovative and cost-effective solutions of environmental issues that have emerged during urbanization with an ever increasing need for low cost energy that is environmentally acceptable, as well as on theories and methodologies of sustainable urban development.  Initially, five areas of research will be jointly conducted by researchers from Rice and Nankai.  These areas include:

The Center’s ongoing research include two projects funded by the National Natural Science Foundation of China (NSFC) on bioavailability and reactivity of persistent organic contaminants in soils and sediments, as well as two projects on the proposal stage – 1) propagation of antibiotic genes in the environment; and 2) fate and transport of organic contaminants during subsurface remediation.  Moreover, 9 additional proposals have been prepared by researchers at Rice and Nankai and will be submitted in the near future (attachment 1).

Additional collaborative research areas involving other focus areas and potentially additional research institutions will be identified in the future.

Many of the environment problems and sustainability issues are international and need global collaboration.  The goal of our educational programs is to provide international educational opportunities to prepare students in both institutions for this increasingly global workplace.  The proposed activities of the Center will allow students to participate in practical engineering in both countries, to have access to leading  and Chinese industries, to be familiar with international commerce, and to better understand different cultures. 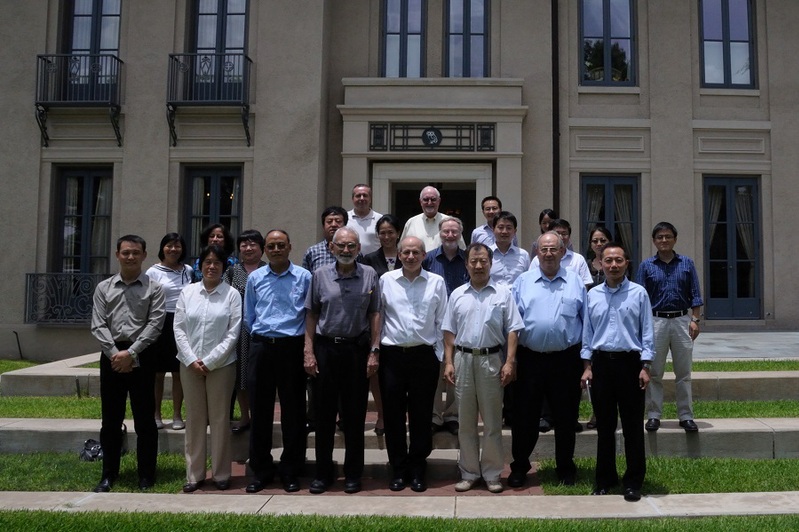